Reasoning about the structure of a black hole (hypothesis) | vprikusku.com
Перейти к содержимому

Stephen Hawking on black holes: «They say that facts are sometimes more bizarre than fiction, and nowhere is this more justified than in black holes. Black holes are more unusual than all the fictions of science fiction writers, and their existence is a proven fact. » [1, p. 127]

Currently, a lot of information about black holes has accumulated [2], which is often mystical in nature and is very far from a scientific view of these objects.

Currently, there is no idea about the structure of a black hole from a scientific point of view, and the article attempts to present a structure based on the law «Interaction of rotating bodies» proposed by the author [3]. The analysis of the currently available information on black holes is carried out on the basis of the «tidal wave theory» proposed by the author [4].

The purpose of the article is to present the structure of the galaxy’s black hole as a body of rotation with its own features due to the size of the object. The task is to imagine the further development of the black hole of the galaxy to the black hole of the universe and to identify the features of such a transformation. Certain elements of the black hole structure have already been identified and described in the scientific literature, and some elements of the structure have not yet been identified and the author has tried to present them on the basis of new scientific knowledge.

The structure of the black hole is shown in the drawing (Fig. 1) 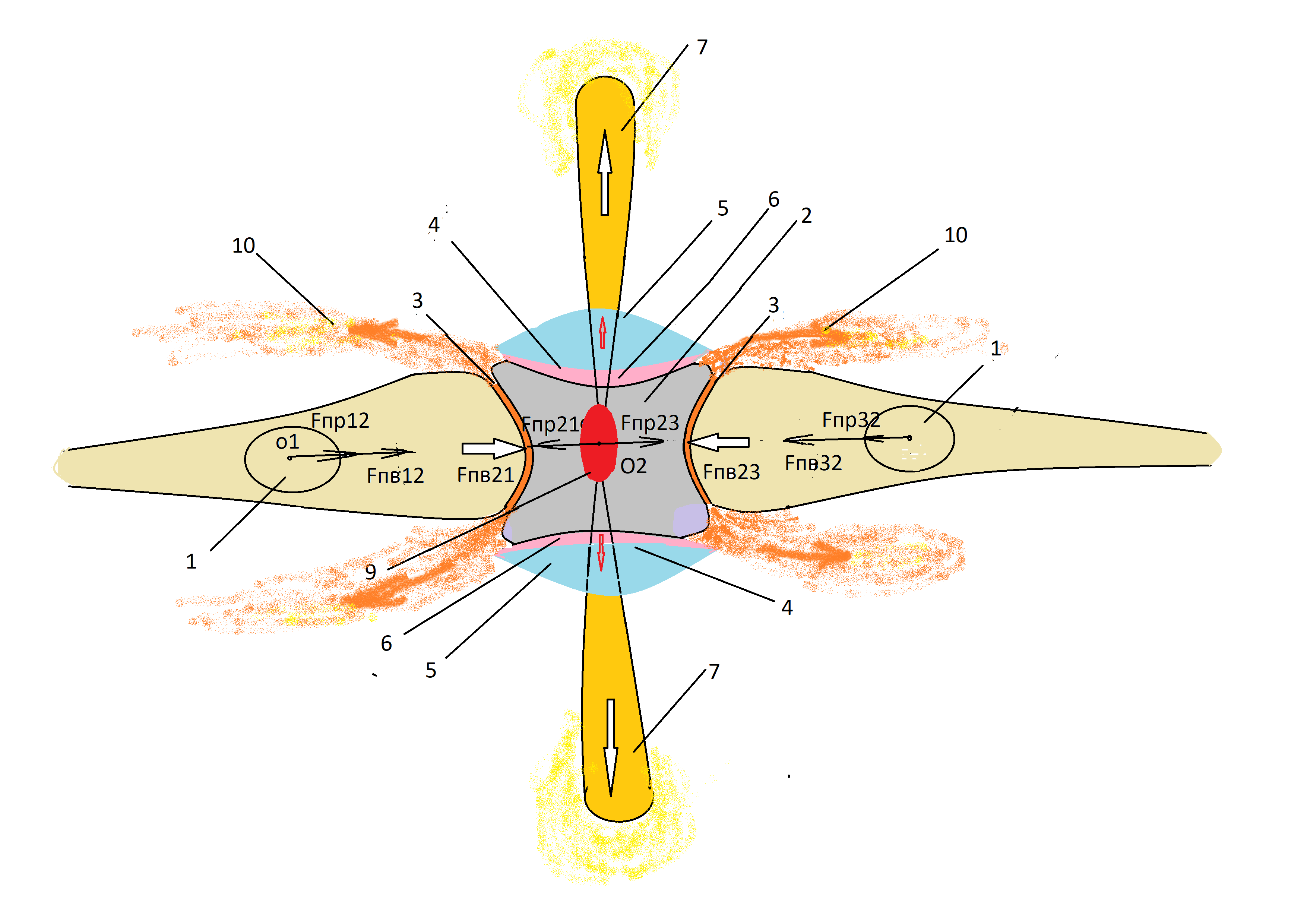 Fig. 1. The structure of a black hole.

The low temperature of the future event horizon is due to the fact that high-energy radiation is released in the polar part (7). They represent the nuclei of heavy elements synthesized in a black hole. During the synthesis, the volume of the nuclei increases and the process is accompanied by energy consumption. A further decrease in temperature occurs when particles join the nuclei in the photosphere. Heavy element atoms can leave the event horizon of the future only after warming up, which happens after a lightning strike from gas storm clouds. Heating the atoms increases the fluidity of the electrons and they are better excited by the tidal wave, which pushes the atoms away from the gravitational field of the black hole. This phenomenon is widespread in the universe and is found even on Earth. The weakly radioactive heavy element radon-222 coming out of the Earth after the decay of radium, after a lightning strike, acquires energy that carries its invisible matter up to the ionosphere, where it decays and becomes visible by the ionization of inert gases in the form of «sprites», «jets», «elves». This phenomenon also explains the high temperature of the Sun’s corona. Invisible radiation from the Sun escapes from the surface and decays into the corona with a large release of heat. At the same time, a darkening of the Sun’s surface is observed at the exit point of the radiation, which indicates a decrease in the temperature at the exit point. On the surface of the Sun, there is no need to heat the radiation, since the surface has a fairly high temperature (about 6000 Deg. With)

In the center of the black hole’s rotor, a zone of extreme parameters of pressure, temperature, and rotation speed (9) is created, which creates conditions for the formation of waves of tiny vortices from decayed matter. The basis of this zone is formed in supernovae and after their decay is a neutron star, characterized by high density and high rotation speed. Creating an accretion disk around itself from the matter surrounding it, the neutron star turns into a black hole. So far, there are no cases of black hole decay, but galaxy absorption and black hole mergers have been observed many times. It is assumed that black holes can take on arbitrarily large sizes, which are limited only by the ability to receive matter to convert it into rotational energy in order to keep matter inside them in a compressed form. When it reaches a size that makes it impossible to get the necessary amount of matter, the black hole explodes and all its contents are thrown into outer space. Most of the mass and energy of the black hole is concentrated in the rotor and the energy of the explosion is formed in it. 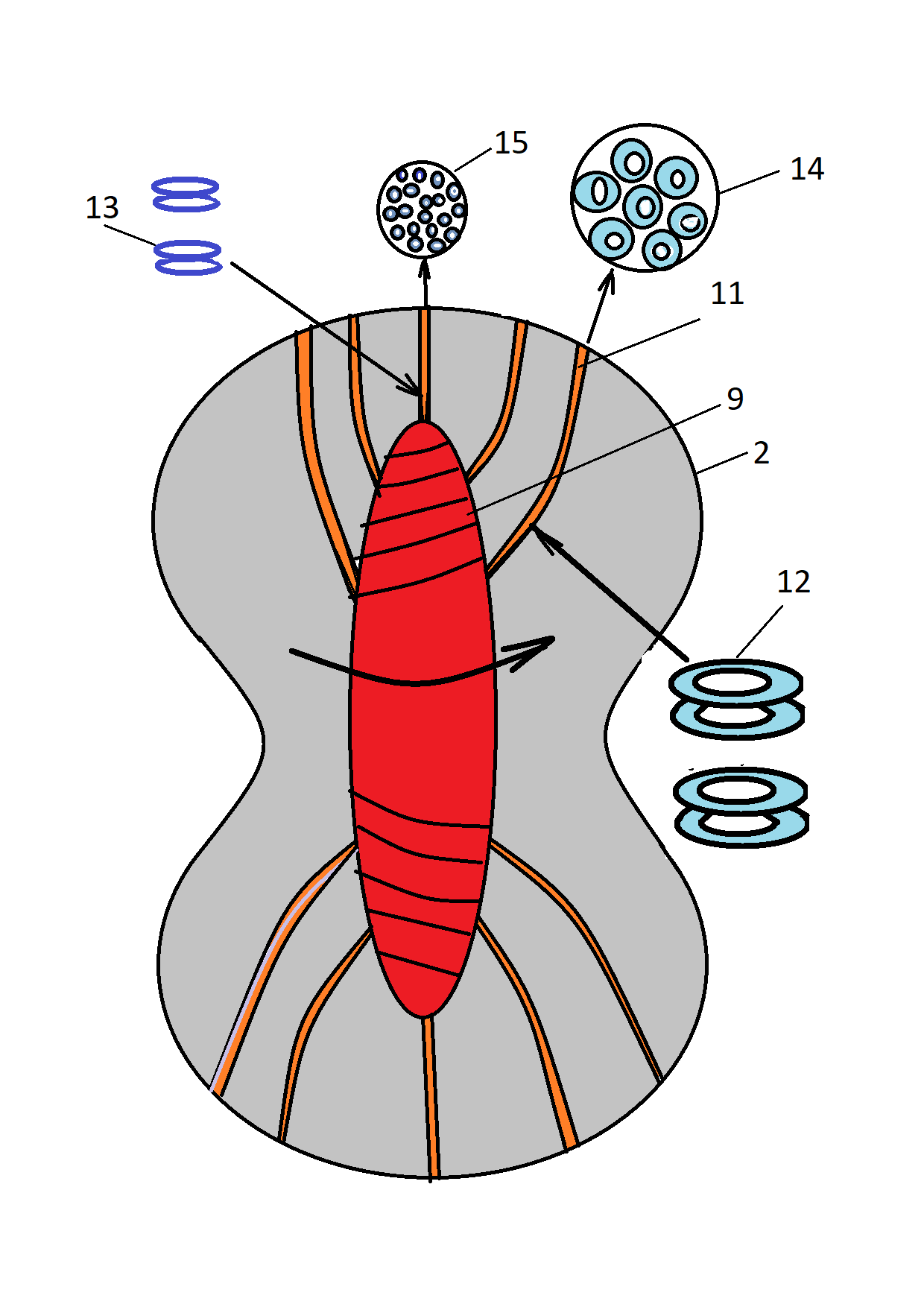 In the rotor of a black hole (Fig.2), matter decays and the densest of the particles gather to the center of rotation of the rotor, where the greatest pressure is created. Under the influence of this pressure, matter breaks through the pulse channels (11) in the direction of lower pressure, which is located in the polar part of the black hole. Through these channels, matter moves towards the event horizon of the future. The channels are opened by high pressure and at the moment of opening, the formation of toroidal vortices, which are hadrons, occurs. When the pressure drops, the channel closes. Different radius of rotation of the pulse channel relative to the center of rotation of the rotor corresponds to a different density of particles from which the formation of hadrons occurs, and therefore a different density of chemical elements that will be formed from them. As an example, the formation of low-density hadrons (12) and high-density hadrons (13) Toroidal vortices have the property of entering into a strong interaction in pairs, in which the directions of rotation of the vortices have different directions. After entering the strong interaction, the pair of nucleons rotates together, having a precessional motion, which is the basis of the weak interaction with other pairs of nucleons. In accordance with their speed capabilities, the pairs of nucleons make up the helix of the nucleus of a chemical element. The fastest pairs are placed at the head of the spiral, and the rest follow them as the speed of rotation decreases. Such a spiral has the ability to replenish energy and then it is compressed (15) or to expend energy and then the spiral is decompressed (14).
As a result of the rotation of the black hole’s rotor at a speed exceeding the speed of light, the nuclei of matter trapped in the black hole disintegrate. Each decay element has a density greater than that of the element before the decay. The densest element of the decay is the particles from the decay of hadrons, which are grouped in the center of the rotor (Fig. 3). It is assumed that after the Big Bang of the proto-universe, these particles form photons of relic radiation, representing pairs of toroidal vortices united by a strong interaction. In addition, a large number of photons fall into black holes as beta studies and gravitational waves, which do not need to be reformatted, but only replenish their energy. 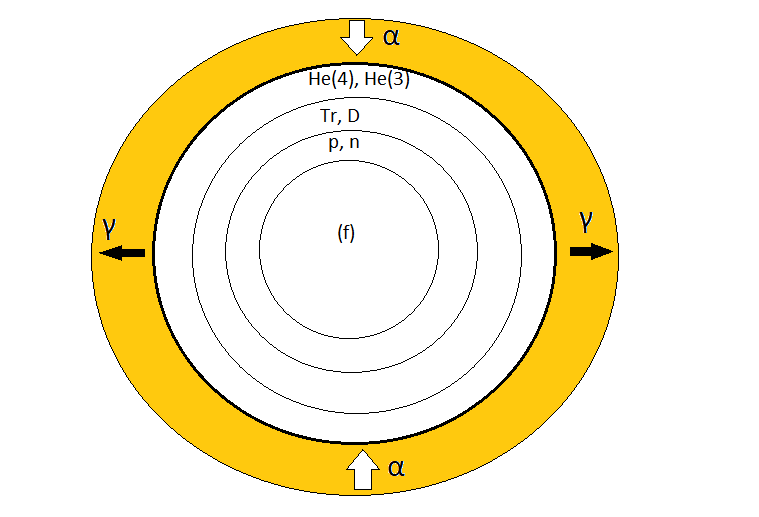 The decay of matter in a black hole occurs at high pressure and temperature, so the speed of light is less than in a vacuum and corresponds to the microwave range of radio frequencies (Cf.). After the Big Bang, the appearance of light occurs under similar conditions, and it should be expected that the speed of light has the same value (Cf.) This fact is confirmed by the fact that the most intense radiation of black holes occurs in the microwave radio range — the range of relic radiation (Fig.4.), which means that the range of relic radiation stores information about all events in the universe and the cosmos. «White noise» is information about the state of the entire cosmos, modulated by an infinite number of black holes. 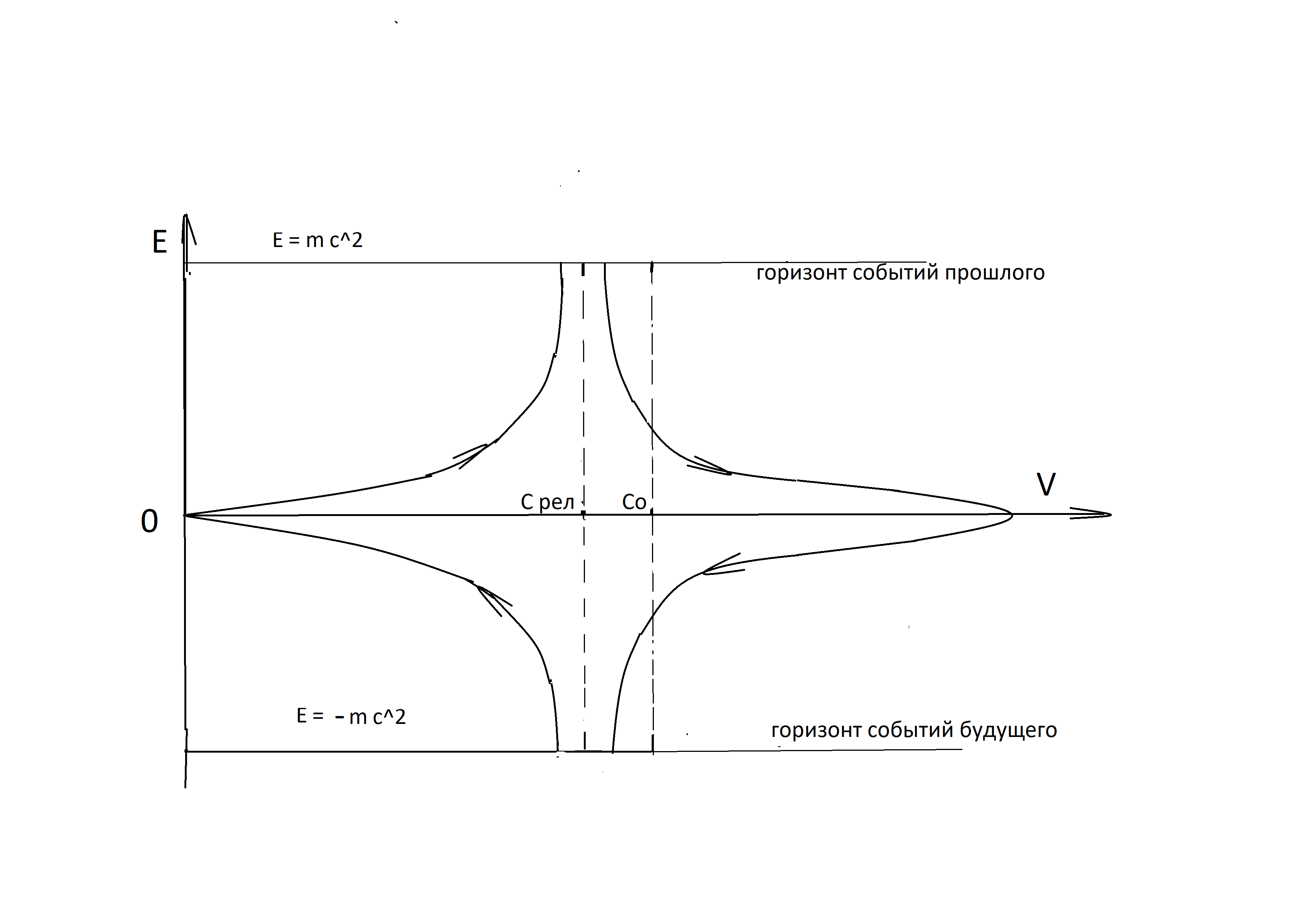 Fig. 4 Graph of energy transformations in a black hole.

In the vastness of space, there are an infinite number of universes united by a common relict microwave radiation (Fig. 5), the energy of which is the engine of the entire process of transformation of matter. An increase in the temperature of the relic microwave radiation (redshift) may indicate an increase in the energy of the physical vacuum. Since the Big Bang, our universe has been giving energy and mass to the surrounding space in the form of gravitational waves. Other active universes do the same (#1, # 2). As a result, antinodes of mass and energy are formed, which by mutual attraction collapse into new black holes of the scale of the universes and prepare new Big Explosions. This model of outer space explains the observed accelerated expansion of Our universe towards the black holes of future universes and the matter of existing universes. 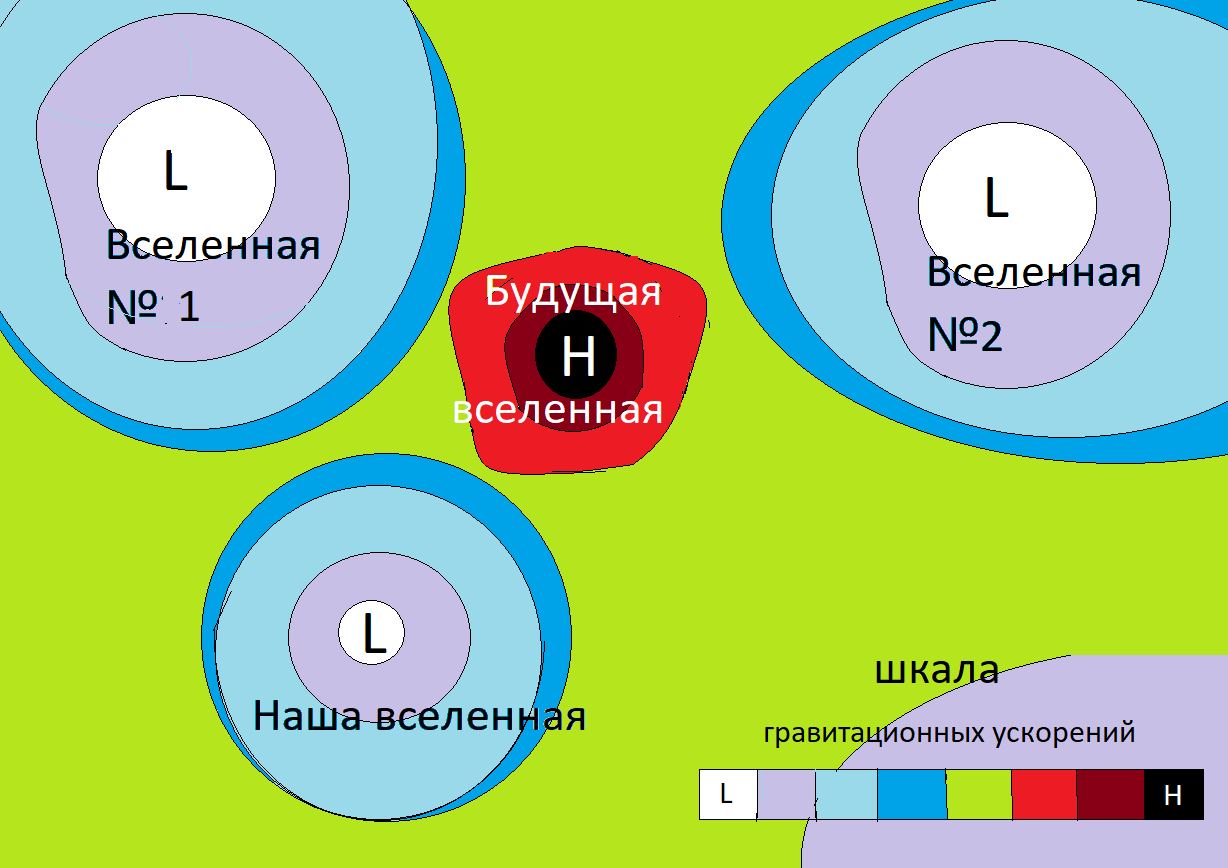 Fig.5 The position of white and black holes in outer space. At a certain point in development, the universes begin to expand with acceleration towards the forming black hole of the new universe.

At present, the concept of «white holes» has appeared[5]. This puts emphasis on the structure of the cosmos. Black holes gravitational waves are absorbed and exploded by a white hole that emits gravitational waves. The author suggests that both of these phenomena can occur simultaneously during the explosion of supernovae. Any star has a core inside it that rotates faster than the outer shell, since the radius of the inner core is constantly decreasing with a constant moment of rotation. Inside supernovae, there are supposedly black holes that feed on the energy of the stars ‘ internal matter. If it is impossible to replenish the energy to rotate and retain the acquired mass, the black hole inside the supernova sheds the excess mass and continues to live as a neutron star. The ejected mass is converted into the energy of a supernova explosion. Over time, the neutron star begins to collect an accretion disk, turning into a black hole of the galaxy.