Introduction
The interaction of rotating bodies is carried out by means of tidal waves, which are gravitational waves and the existence of which has recently been proved by science (February 11, 2016). The medium in which the interaction is carried out is a physical vacuum (density of 400-500 photons per cm^3; T = 2,725 K; F = 160 Ghz.)

Relevance
In modern science, four types of interaction are considered: strong, weak, gravitational and electromagnetic. In this case, the gravitational interaction is considered in the form in which it was formulated by I. Newton; that is, in the static state of non-rotating bodies. 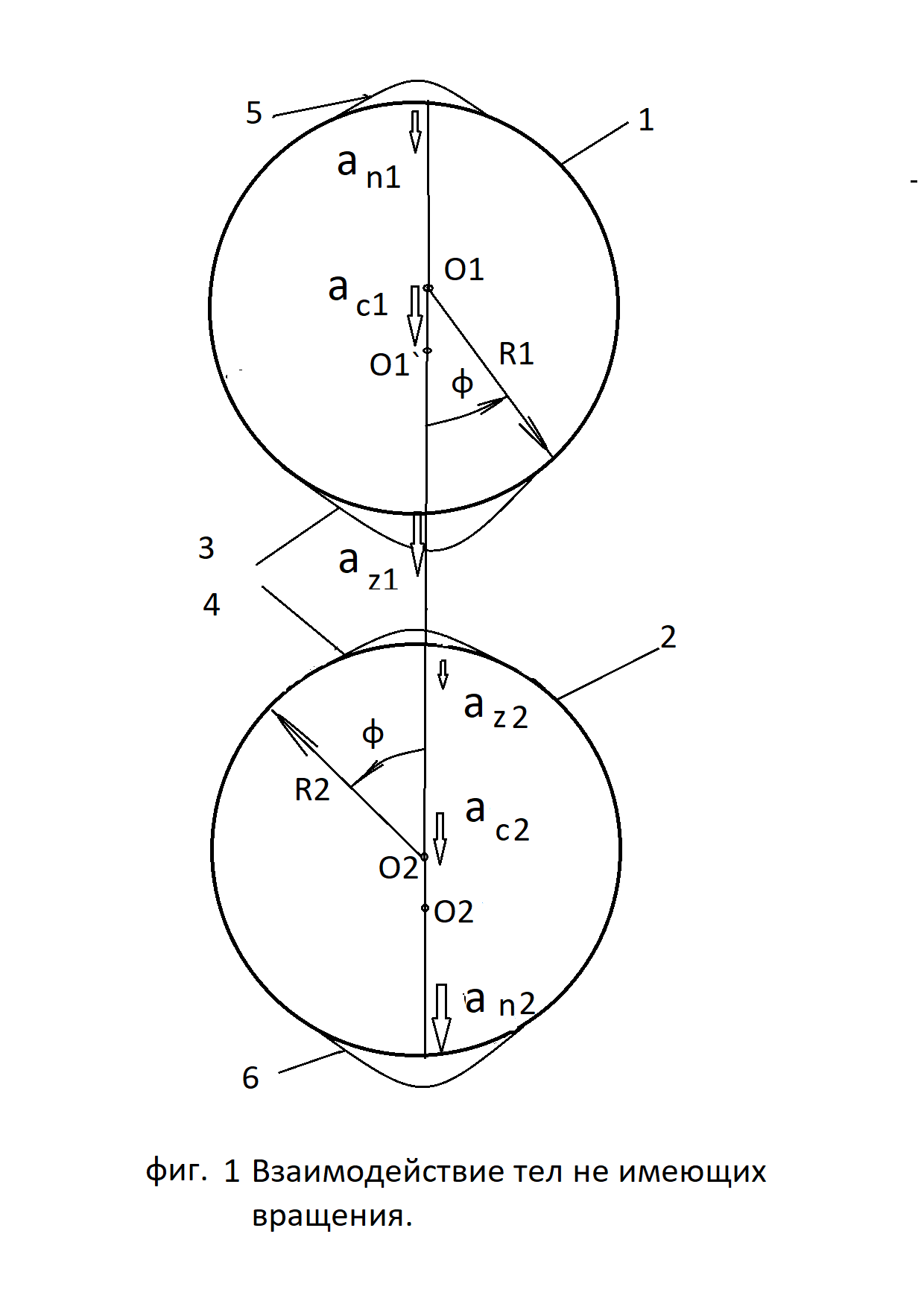 | δw zi | > | δw ni | — therefore, bodies have an additional attraction (during attraction or entrainment), in A. Einstein’s GR, it is known as an additional curvature of space by a massive body. It is quite clear that space is bent by both massive bodies. Under repulsion, the inequality changes | δw zi | < / δw ni | .

For clarity, we consider the interaction of two bodies (1) and (2) [FIG. 2], like the Earth having a hydrosphere. 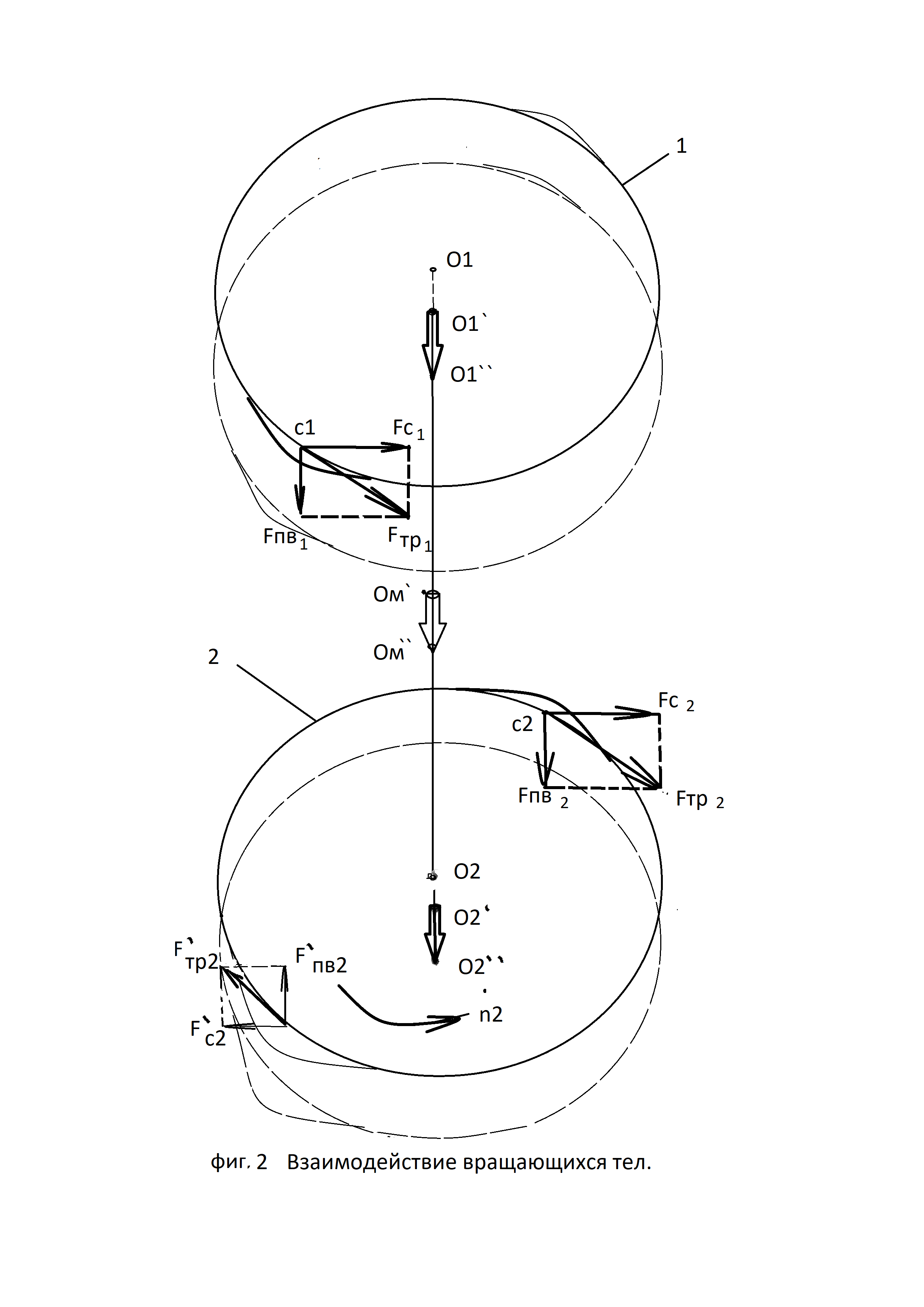 The centers of inertia of the bodies are located at points (O11) and (O21), being constantly displaced relative to their geometric centers (O1) and (O2 ) due to the inequality of tidal waves on the midday and midnight sides, and as a result of rotation they are shifted to points ( O1 11) and (O211 1). If a body is attracted by another body, the center of inertia shifts towards the midday line [body (1) If the body is repelled from the other body, the center of mass is shifted towards the midnight line /body (2), and although tidal wave on the midnight side in this case will be greater the friction force on the midnight side is less than the midday due to the fact that the flow of tidal waves on the midnight side sent in accordance with the direction of rotation of the body, and to the South, are directed oppositely. The common center of inertia moves from a point (O1m) to a point (O11m), that is, it rests relative to the position of the bodies. When considering the interaction and relative displacement of two bodies, the interaction of both bodies with a physical vacuum and the movement of their center of mass in a physical vacuum and relative to other bodies, which represents an absolute displacement, remain outside the frame.

In accordance with the law of universal gravitation [1 p. 63], all bodies are mutually attracted by a force that is calculated by the formula

where:
G is the gravitational constant;
M1,M2 -masses of celestial bodies;
R is the distance between the bodies

The analysis of the formula [8] shows that the n-order derivative has the form:

As the order of the derivative increases and the distance between the interacting bodies (R,) decreases, the value of w (n) tends to infinity, as the numerator increases and the denominator decreases infinitely. This explains the rigidity of the intra-nuclear interactions.

The analysis of the formula [9] shows. when bi-directional rotation of the body, the interaction is similar to the strong nuclear interaction, mutual unwinding of the body and reducing the distance or mutual inhibition bodies with increasing distance. Mutual unwinding means that a body whose speed is greater has a load in the form of a body whose speed is less and the speed difference is a hysteresis, which will change the sign if the other body starts to increase the speed. Similarly, with mutual braking. The author suggests that mutual unwinding with decreasing distance can be observed when matter enters a «black hole,» when matter stores the energy of rotation. The energy source in this case is alpha particles decaying to plasma at the event horizon of the black hole’s past. Mutual deceleration with increasing distance can be observed at the exit of plasma matter from the «black hole», when there is either radiation radiation of superdense elements synthesized from this plasma in the form of jets from the event horizon of the future of the black hole, or explosive expansion of the plasma, as in the Big Bang. The energy carrier after the Big Bang is the photons of microwave radiation.

With unidirectional rotation, an interaction similar to the weak nuclear interaction occurs with the formation of orbits, the average position of which is determined by the law of universal attraction of I. Newton, and the deviation from the average orbit is determined by the action of tidal forces. When the bodies approach, the repulsive forces increase due to an increase in the rotation speed of the body (2), and when moving away, the attractive forces increase due to a decrease in the rotation speed of the body (2).

The strong and weak interactions can pass from one to the other if one of the bodies makes a semi-somersault of Dzhanibekov, the causes of which can be both the action of external forces and a decrease in the kinetic moment of one of the bodies. If the body has enough energy, then it finishes the somersault, and if not, then there is a transition to another type of interaction.

Tidal accelerations, and hence the tidal wave forces, vary inversely with the cube (if only the first derivative is taken) of the distance, which distinguishes their action against the action of the gravitational attraction forces, which depend on the inverse proportion of the square of the distance. This served to understand the action of tidal forces as an additional curvature of space near massive objects by the General Theory of Relativity. A. Einstein did not understand that the displacement of the orbit of Mercury occurs not only because of the massiveness of the Sun, but also because of its rotation. The problem solved for Mercury was not suitable for the Earth, because the speed of rotation of the Earth is much higher than the speed of rotation of Mercury. Academician A.D. Sakharov suggested that the second body should also affect its acceleration, but he did not understand that it affects its rotation.
The tidal acceleration has a factor of the form (t*ω), which, on the scale of the Universe, can be considered as the number of revolutions of photons of the relic microwave radiation since its appearance. The main conclusion from this can be drawn that the Universe is not infinite and when reaching (t*ω)< 1, the Universe will begin to collapse.

The gravitational constant (G) may change, as it was calculated for other purposes. This is taken into account by introducing (G1), (G2)…(Gn) for different orders of derivatives.

In accordance with this law, the spirals of galaxies and the universe are formed. In the figure [Fig.3] shows the formation of a spiral by two cosmic bodies with different angular velocities of rotation. The body And extends to the body In a force of attraction Fпр and gravity tidal wave Fпв, the body is attracted to the body And the force of mutual attraction Fпр, but is repelled by the power of the tidal wave Fпв (this force is sometimes mistakenly take for antigravity). An important feature of the joint motion of two bodies is that a body with a lower rotation speed will always catch up with a body with a higher rotation speed and at the same time they both move relative to the physical vacuum and other bodies. Conclusion.
Both in the nature of its action and in its main manifestations, gravitational induction is similar to electromagnetic induction and is subject to the action of its own laws. One of the defining laws may be the law «Interaction of rotating bodies». This law allows us to take a new look at many issues that were previously impossible to solve (solving the three-body problem, creating gravitational thrusters, gravitational locators, gravitational lags, media separators, understanding the nature of «black holes», ball lightning and radiation emissions, etc.).)