Introduction
In quantum chromodynamics (QCD), it is assumed that nucleons consist of quarks that have certain properties and give these properties to nucleons [1, p.380]. When studying the properties of tidal waves, the author was faced with the fact that the properties that are attributed to quarks can have tidal waves that occur in nucleons during their rotation.

Relevance.
Currently, there is no single view on the interactions that occur in the microcosm. The author suggests that it is possible to eliminate the disagreement if it turns out that quarks are tidal waves on the surfaces of rotating nucleons.

Goals, tasks.
The aim of the paper is to prove the tidal origin of quarks. The task is to create a model of internal interactions in atoms.

Scientific novelty.
In the analysis of interactions in the microcosm, the law «Interaction of rotating bodies» [3] and «Tidal Wave Theory» [4], proposed by the author and tested in the analysis of interactions in the macrocosm on the example of the Earth and the Sun, are applied.
The main phenomenon that immediately attracts attention in the analysis is the three quarks inside the nucleon. Figure 1 (a) shows the Feynman diagram, which explains the strong interaction of nucleons with quarks. Quarks exchange gluons and change their direction of motion. 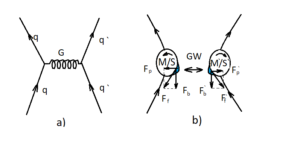 W2 = 2G1*M1[ R1*ω1* sin (ω1* t+ φ1) — R2*ω2*sin(ω2* t+ φ2)]/ R^3 (1)
G1 is the gravitational constant at the first derivative;
M1,M2 -masses of celestial bodies;
R — distance between the bodies;
ω1, ω2 — angular velocities of rotation;
φ1, φ2 — initial rotation angles;
R1, R2 — radii of celestial bodies;
t-time;
When the nucleon rotates, three main tidal waves can occur in the nucleus. The first tidal wave arises from a strong interaction with another nucleon. It is reversible and occurs at the point of maximum convergence of nucleon cores. With this tidal wave, the nucleons transfer energy to each other and the tidal wave does not allow a significant decrease in the energy of one nucleon relative to the other. From formula (1), it can be seen that for different directions (-ω2) of the rotation of the nucleons, their accelerations are maximal. A decrease in the kinetic energy of any nucleon causes a decrease in its tidal attractive force, which is equivalent to the appearance of a repulsive force, since the nucleons are pulled together mainly by tidal forces. The increasing speed causes an increase in the force of attraction. Thus, a strong interaction with mutual braking works with increasing distance. An example of such a movement is shown in Figure 1, b). The tidal wave friction force (Ff) has the projections (Fb) — the braking force and (Fp) — the repulsive force.This mode is typical for most of the atoms of the universe. The mode with mutual unwinding with decreasing distance is typical for the process of energy replenishment, for example, when nucleons are found in the composition of stars at high pressures and temperatures, and is observed much less often, since the total energy of the matter of the universe decreases.
The pairs of nucleons are in general precession motion relative to other pairs, and at the same time there is a weak gravitational interaction between them (Fig. 2). 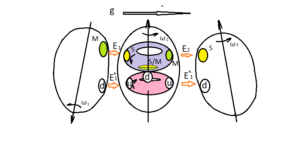 In the weak interaction, the rotating nucleons are in orbits relative to each other, rotating in the same direction. A decrease in the speed of rotation of the nucleon (2) causes it to rise in orbit (Kepler’s law) relative to the nucleon (1). Due to the decreased speed, the repulsive tidal force decreases and the force of universal attraction begins to prevail. Tidal accelerations depend not on the inverse square of the distance, but on the inverse cube, and kill faster than the force of mutual attraction. The nucleon (2) begins to fall on the other nucleon (1) with increasing speed, while the repulsive force increases. As a result, the bodies form a spiral in absolute motion in a physical vacuum, and in relative motion a precessional oscillation in an orbit near the average orbit determined by Newton’s law. Deviations from the mean orbit are determined by the tidal forces determined from the accelerations calculated by the formula (1).

The interaction with a pair of nucleons that have a higher energy is carried out by a driven tidal wave (S), and the interaction with a pair of nucleons that have a lower energy is carried out by a leading tidal wave (M). With a weak interaction, the rotation of the nucleons occurs in one direction (+ω2). The nucleons in the nucleus of an atom are coiled in a spiral, similar to DNA in living nature, in accordance with the energy potential of the nucleon pairs. The difference in tidal waves (M) and (S) in the direction of energy transfer, which is expressed in the displacement of the center of mass of the nucleons in the direction of energy transfer, which is perceived as the gravitational strength, which corresponds to a certain charge of the electric field and the induction of the magnetic field. The magnitude and sign of the charge and magnetic induction determines the position of the tidal wave (quark) on the surface of the nucleon and determines the difference in quarks. The tidal wave has two components: on the illuminated side and on the shadow side, which is perceived as an anti-quark.
In the sources [2, p. 332], [5], such a feature of the interaction of quarks as confinement (from the English. Confinement-the retention of » color»)— a phenomenon in elementary particle physics that consists in the impossibility of obtaining quarks in the free state, since only aggregates of quarks consisting of two (mesons), three (baryons), four (tetraquarks) and five (pentaquarks) quarks are observed in experiments. Nevertheless, there are strong indications that quarks themselves exist: quarks describe the systematics of elementary particles well (the Standard Model) and are observed inside them as partons. Quarks in the standard model interact with gluons, which also experience confinement.
When considering the phenomenon of tidal wave confinement, no questions arise. The tidal wave exists only on rotating bodies and only in the presence of these bodies. It cannot exist separately from these bodies. The strong interaction in QCD is transmitted by gluons, and in the «interaction of rotating bodies» is carried out by tidal waves, which are formed by the antinodes of gravitational waves, which are also subject to confinement, like gluons.

Conclusion.
Tidal waves that occur in the nucleons of atoms have properties similar to those attributed to quarks, and it is possible that quarks are tidal waves. It is not possible to isolate them from nucleons, since they are the result of the interference of gravitational waves.